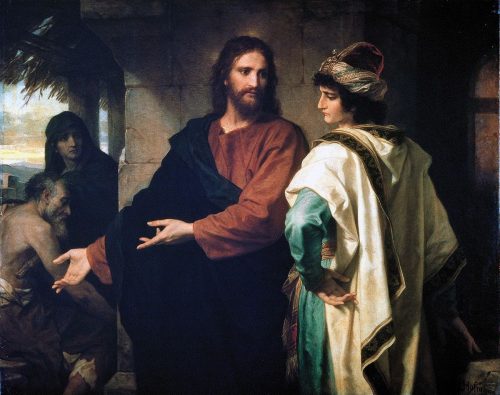 “At first the people were in seventh heaven. A great prophet was in their midst, and he was one of their own! It made them proud. But then Jesus accused them of vanity and reminded them that prophets often had to take their gifts outside the community to be heard. These words angered the crowd. In their anger, they turned murderous. They w have killed him if they could get their hands on him. The funny thing is, they do not get their hands on him. The crowd rises up from the synagogue and runs him out of town intending to force him off a cliff. Yet they are not able to do it, and Jesus just parts the crowd like the Red Sea and walks away. In Luke’s view, Jesus wore God’s protection like a shield. He never had to relinquish his life, and so his final surrender to the cross is all the more amazing. He let God choose the day and the hour; until then, he was obedient to God’s power alone.” (Alice Camille in “God’s Word is Alive”)

This past week, we held our annual Pastoral Council Discernment Meeting with about 15 candidates in attendance. They heard about the purpose of the pastoral council and then had a chance to do some sharing about the gifts they would bring to the council. Later that evening, the present pastoral council met and after prayer and discernment, selected five new members to serve for a period. We will announce the names in next Sunday’s bulletin. I wish to thank our Pastoral Council President, Yvonne and council members for organizing such a thoughtful process to discern new members. Thanks, again!

The St. Valentine’s Day Gala is fast approaching on February 14th. I can promise you that it will be a fabulous way to spend Valentine’s Day with a delicious four-course dinner, music, and dancing to the sounds of the Big Band era! Tickets are on sale online and after Mass today. All proceeds benefit the renovation of St. Francis Hall. Let’s all take a “Sentimental Journey!”

Yesterday, Mr. Angel Ibarra, along with Mr. Hanz Jaime (Comité Hispano Coordinator), and volunteers from our Social Outreach Office traveled to Tijuana on a mission to deliver much-needed food and donations to the “Casa Pobres” (The House of the Poor). Here again, we find the generosity of so many in the parish community to “feed the hungry” and support those whose needs are so great! Thank you, Angel and friends, for putting Matthew 25 into practice!