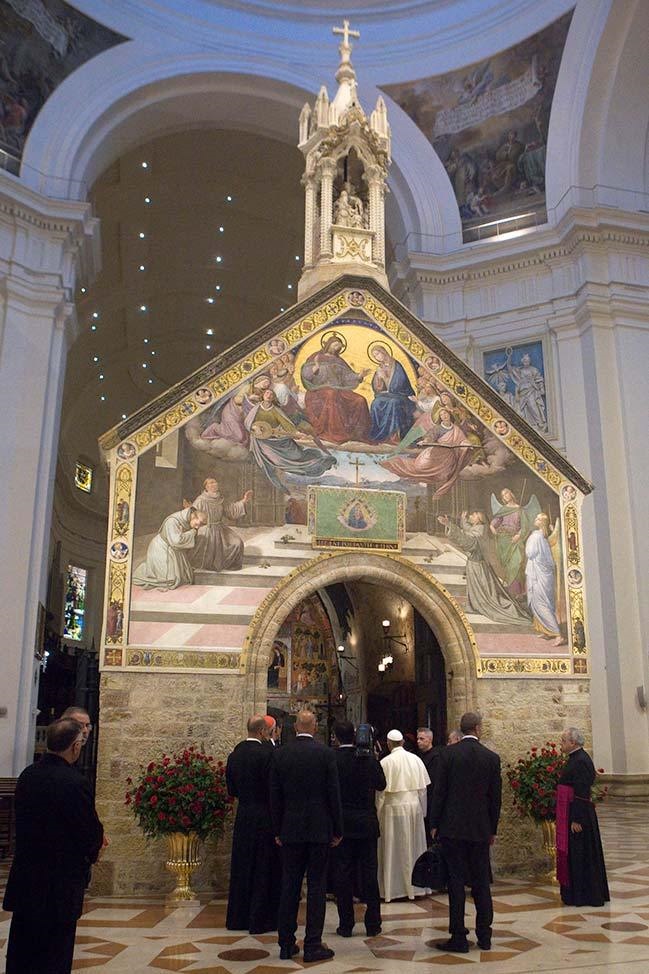 On August 2nd, the Franciscan world celebrates the Feast of Our Lady of the Angels of the Portiuncula. The origin of this feast is a familiar story. One day, as a young man, Francis stopped to pray in a small, tumbled down chapel dedicated to St. Damian. As he prayed before the distinctive image of Christ crucified, our Lord spoke to him, “Francis, Francis, go and repair My house which, as you can see, is falling into ruins.”

This feast day commemorates the renovation of the poor chapel that Francis fondly referred to as the “portiuncula”— the “little portion.” He often returned to the chapel for meetings with his growing group of followers, the earliest members of the Franciscan Order.

Francis loved this place so much that he begged a special blessing from the Pope. Pope Honorius III granted the blessing of “The Great Pardon,” a plenary indulgence (elimination of temporal punishment due to sin). This spiritual gift extended to those who met these conditions during the eight days before or after this feast:

• A visit to the Portiuncula chapel
• A truly contrite confession of sins in the Sacrament of Penance
• Participation in Mass and reception of the Eucharist
• Recitation of the Apostles Creed, the Our Father and also a prayer for the Pope’s Intention.

You too can receive this indulgence by visiting a Franciscan church anywhere in the world (not just the Portiuncula) and complying with the same conditions.

Come to celebrate this beautiful day with the friars and our parish community in the Historic Mission church at a beautiful Mass beginning at 6:30 p.m. on Friday, August 2nd. A reception follows.