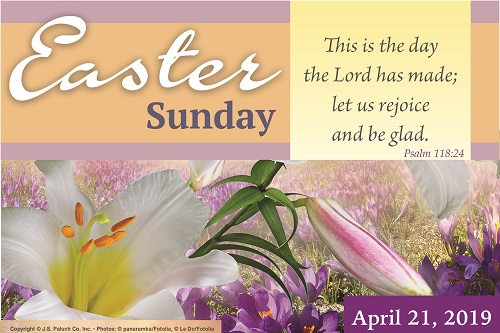 It was a morning of extreme urgency. Mary Magdalene ventured out and found the open empty tomb. The angels, the Gardener‐Lord, will come later in the morning. Mary sees an empty tomb and rushes to tell the others. She used the words “has been taken,” implying the tomb has been robbed. Peter hits the ground running, along with another disciple. The other disciple gets there first and looks in. Since Mary got there “while it was still dark,” she did not see what he sees: wrappings on the ground. Only Peter goes into the tomb and sees the rest of the story, the neatly rolled head covering in its own place. And seeing this, he believes. What do we believe? What does it mean that the tomb is open, the body gone, the wrappings there? Would robbers bother the tomb of a penniless man? Would the Romans gain from removing the body? Or the religious leaders who wanted the body to stay put? Who would unwrap a body and steal it away? And who would pause to fold up the head cloth and put it down? We call this Resurrection! It is not just the meaning of Easter, but the reason there are Christians at all! Alleluia! Alleluia! (From “God’s Word is Alive,” by Alice Camille)

I was so happy to see over 500 people attend the performance of “Faustina, the Messenger of Divine Mercy.” It was truly an inspiring evening! I wish to thank our staff, the Hospitality and planning committees for all the behind the scenes preparation for this outstanding production. I am also happy to announce that although the purpose of this event was not for fundraising, but rather a Lenten spiritual gift to the community, even so, we are able to send $1000 from ticket sales to our Franciscan Mission in Guaymas, Mexico as they reach out to the sick and poor. Thanks for attending. We look forward to other events like this in the future.

As was announced two weeks ago, in less than one year, we have come close to the goal of $710,000 for the remodeling of St. Francis Hall. There is still a small gap to fill, and I am asking every parishioner to prayerfully discern an amount that they can contribute to this project. St. Francis Hall will become a beautiful gathering place for our parish dinners, conferences, shows, classes, and many other events. Next Sunday, a special offering will be taken up for this much-needed remodeling and updating of St. Francis Hall. Thank you for your generosity.

In closing, I congratulate all those brothers and sisters of ours who received the sacraments of Baptism, Confirmation and First Eucharist at the Easter Vigil! What a joy it is to have over 30 new members added to the Body of Christ! We pray for God’s special blessings upon them as now they joyfully join us in our Catholic faith journey! All the blessings of this Easter Season to all of you!