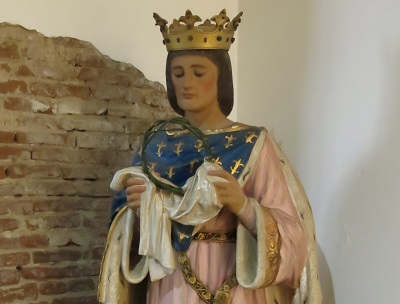 San Luis Rey is the Spanish name for Louis IX, King of France.

Louis was a younger contemporary of St. Francis. Prince Louis’ education included instruction by some of St. Francis’ earliest followers. He became the King of France at the age of twelve and ruled his country for 44 years.

St. Louis is often pictured holding a crown of thorns. As early as the 4th century, Christians had venerated a crown of thorns in Jerusalem. By the 1100s, the Eastern Roman Emperor had brought the crown to Constantinople. For reasons financial and political as well as spiritual, possession of the crown passed to St. Louis. He brought it to Paris in 1239. From the chapel that St. Louis had built, the crown eventually moved to the Cathedral of Notre Dame where it has been honored since 1809. The relic was undamaged in the recent fire at Notre Dame.

Louis IX was celebrated for his piety and kindness towards the poor. He joined other laymen as a member of the Third Order of St. Francis and is now honored as their patron. He lived for the welfare of his subjects, making him a model for future kings and rulers. St. Louis was canonized in 1297.