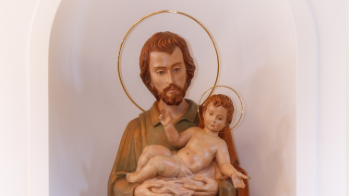 This fear of Joseph: Where does it come from? Not from his fear of God, for he is a just man who knows God’s promises. It comes from fear of himself, fear that he is not worthy to be involved in such a beautiful work of God, fear of his own fragility, fear that he is too little to be chosen to be the protector of God’s child. “is it true that I could be included in God’s plan for the world,” he asks. Yet grace comes, God has chosen him, lifted him up, and invited him into the great mystery of love. Christian, he says to each of us, do not be afraid to recognize your own dignity and mission in God’s love. Pope Francis declared this “year of St. Joseph in his apostolic letter of December 8, 2020, “With A Father’s Heart.” The letter released on the 150th anniversary of Saint Joseph being proclaimed Patron of the Universal Church—that’s us. He is our patron and that brings many blessings.

Joseph is identified here in his unique role as a “father” throughout the apostolic exhortation—but he is much more than that, a model for all of us, men or women, who are called to serve and to protect the presence of Christ in the world.

It is very fitting that we celebrate St. Joseph at this Old Mission San Luis Rey. The Mission enterprise itself when it first began was placed under the guidance and protection of St. Joseph. Two stories from Junípero Serra’s companion, Francisco Palou [Life of Serra, XI, XX]

Serra spend 10 years in Mexico City before coming to Alta California. During that time, he would give missions in the south. Once, when he had finished a mission, he and his companion were going back to the colegio, walking. It was getting dark and they were not sure they could make it. They saw a house along the road and came to the door. An old man met them, along with a woman and a baby. They were invited to supper and stayed overnight. When they set out the next morning, they ran into some muleteers who asked them where they stayed the night before. After Serra told them the story, the muleteers simply responded: “In all the way you went over yesterday, there is no such house by the road.”

The poor friars felt it was a miracle. Joseph had welcomed them into his house, fed them, and provided great affection.

They gave thanks to God for taking care of them through St. Joseph.

Serra came to San Diego in July 1769; he went quickly up to Monterey. When he came back to San Diego after his first trip in the Spring of 1770, he found the colonists starving: no rain, no crops, the California desert had taken over. The ships that were to bring supplies from Baja California had not arrived. The captain of the expedition decided that if the ship did not arrive by the feast of St. Joseph, March 19th, they would all go back home and abandon the project of evangelizing California. Serra and his companion Crespi vowed to stay on no matter what happened. Junípero suggested they make a novena to St. Joseph, the patron of their adventure. On the 19th, St. Joseph day, the last day before they had to leave, they spotted a ship off the coast of San Diego—food had arrived. The expedition was saved, Serra could continue his great work.

Serra went on to found nine California missions. For the rest of his life, as Francisco Palou, tells us, Serra celebrated on the 19th of every month a solemn mass in thanksgiving for St. Joseph, who had provided for the friars and the colonists and continued to protect those whose sole desire was to give birth to Christ in this world, giving Jesus a name, a royal lineage, and a mission of preaching the good news.

Let us not doubt that we too are privileged to be included in the family of St. Joseph. This year as we prepare for the feast, we make our own pilgrimage, giving thanks and praying that with his protection and example we might also give Jesus a name and enable him to work to build a home for all people in today’s world. — Fr. Joseph Chinnici, O.F.M.

Joseph Chinnici, O.F.M., is happy to celebrate the feast of St. Joseph! President emeritus of the Franciscan School of Theology, a comfortable parishioner at Old Mission San Luis Rey for his collegiate years and subsequent work in graduate education, he now lives at Immaculate Conception Parish in San Diego and continues to teach at the school of theology located at the University of San Diego.

WITH A FATHER’S HEART

Pope Francis has named this “The Year of St. Joseph” and wrote an Apostolic Letter, Patris Corde (“With a Father’s Heart”). The full letter can be found here.

JOIN US:  MASS TO CELEBRATE ST. JOSEPH Friday, March 19 – 8:00 a.m. inside Serra Center   In this year of St. Joseph, join us as we celebrate St. Joseph’s Feast and St. Joseph’s Table beginning on Friday, March 19, 2021, at the 8 AM Mass and through the weekend. Baked Goods will be on sale after the 8 AM Mass on March 19th, as well as after the weekend Masses as supplies last.  (Bake a good to do good!  Signup to bring a baked good here.   Proceeds go to an orphanage and Franciscan Mission.)