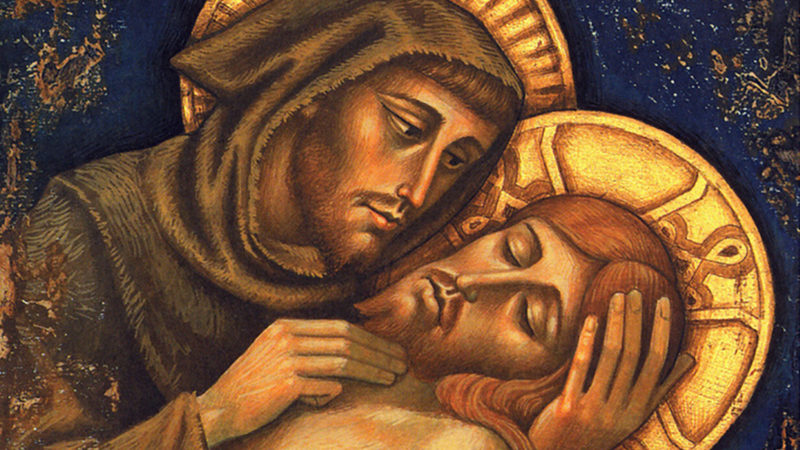 The following is a Franciscan Reflection, shared with us in place of a letter from our Pastor.

St. Francis was a Loser

As a youth, Francis dreamed of becoming a knight. He did become a soldier, but was captured in battle and imprisoned instead. Francis came from a wealthy family, but rejected his father and his wealth, and served the lepers and fixed dilapidated churches instead. Francis begged for building materials and food. His old friends called him a loser.

Francis attracted followers, calling them “lesser brothers”, fratres minores. ’Minores’ referred to peasants and poor people who didn’t have any power in society, as opposed to the mayores: royalties, knights, merchants – who did. People called Francis, ‘Il Poverello,’ the Poor one. Francis thought his followers believed in his ideals of poverty. But when he came home after traveling to the Holy Land, he found that even they had renovated their once-simple house to be more comfortable. After Francis’s death, his order broke into bitter arguments and divisions.

According to our world’s standards, Francis was a loser. But if we are using world’s standards, aren’t we Christians, losers too? Don’t we have people like Archbishop Oscar Romero who died defending the poor of El Salvador; the Trappists of Algeria who died in solidarity with their Muslim neighbors; Sr. Dorothy Stang who was killed by loggers and landowners for defending the indigenous people of Brazil; and Fr. Roberto Malgesini who was killed last year in Italy by a homeless person he had been ministering to? Doesn’t the world look at them as losers? Don’t WE look at them as losers?

But what if this is exactly where we need to be as church? Don’t we worship a God who spent his time among the poor, prostitutes, and other sinners and marginalized people, the losers of society; a God who died on a cross, considered foolishness and a scandal, a loser by many? Pope Benedict once said that “It is not the Church of successful people that we find impressive… Rather what strengthens our faith, what remains constant, what gives us hope, is the Church of the suffering.” Do we want to build impressive fancy churches made of precious materials, stained glass, and imposing design or do we build a church that can serve as a field hospital for those who have lost the battles of life, who suffer from violence, addiction, broken heart, illness, abandonment? Do we build a church that caters primarily to the powerful or do we build a poor church for the poor like what Pope Francis wants, a church filled with people considered losers by the world?

We know what kind of church St. Francis chose to build. That night, Fr. Sam shared his hope that all of us, the Franciscans of today, habit and non-habit, vowed and non-vowed, who are part of this ongoing Franciscan movement, can follow Francis’s example.

Homily by Fr. Sam Nasada, OFM, given on the Feast of St. Francis, October 4th, 2020 and reprinted here with his kind permission. Fr. Sam’s homily was inspired in part by the article: https://wherepeteris.com/catholics-are-losers/